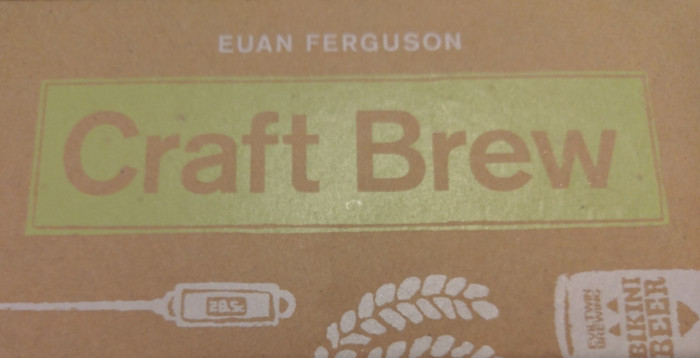 End of the Beginning

TLDR: This will be a short post as my first brew day of the year was sabotaged by a blocked pipe! However, given that this site is primarily a journal of my brewing experiences and lessons it would be amiss of me to exclude it.

The grain bill for my ninth foray into homebrewing was taken from Craft Brew by Euan Ferguson and is more or less identical to that of William Bros ’s 80/- recipe included in the book. William Bros are a craft brewery from Alloa , home of my aunt and also a town with a brewing heritage and one that I, for some reason, associate with 80 shilling.

The hops were Goldings 5.2% (the percentage being an indication of alpha acid volumes) and the yeast was (unused but would have been) White Labs Edinburgh Scottish Ale Yeast (WLP028).

What was notable about this recipe were the lack of volumes for water and wort at the various stages and any indicative suggested method to follow. As such, I crafted a brew day plan based on previous brews and hope that it works out.

The brew day was a little less organised than usual but went reasonably smoothly until post-boil when it came time to rapidly cool the wort before transferal into the conical fermenter. The metal circulation pipe on the grainfather got blocked by wayward grains and therefore wasn’t pushing the boiling hot wort through the counterflow chiller, also as the pipe contained boiling hot wort and I don’t have heat resistant gloves, I was unable to try to investigate and fix until the wort cooled to a more reasonable temperature. It took several hours for the wort to cool by which time I had struck the day off as spoiled. If you let wort cool naturally then it massively increases the risk of dimethyl sulfide formation which would have resulted in a very unpleasant beer.

In the heat of frustration, I had decided that after a string of issues with the Grainfather that I was going to immediately replace it. However, once I had naturally cooled down over a period of some hours, I thought better of spending several hundreds of £s for a replacement. As it happens, the grain creep into the pipes is a known issue and after customer feedback to that effect a new filter was created which should help control this. It was £16 so I bought it. This should stop overflow grains getting into the mash pipe and into the wort at the bottom of the mash tun, which should reduce the amount of grains making it into the circulation pipe (though given I had to hold it in place for the duration of the 50 minute mash during brew day #10, I feel perhaps it might have been designed a little better - apparently correcting this flaw will require a brazing specialist so £16 is potentially only the start!).

However, there is an additional point of risk. The inner sleeve\grain basket of the unit has a gap between it and the mash tun (which it needs) and if pouring grains in from a wide receptacle (such as a big soup pot) then there is a risk that some grains will fall between the sleeve and the walls of the mash tun into the wort at the bottom and be sent to the recirculation pipe. The additional filter should catch these during mash though. I have (mid-mash on brew #10) adapted my process to transfer the grains using a small 500ml jug from pot to tun. I also need to order heat-resistant gloves as a back up.

Anyway - as I wrote the draft of this post (as always) I was brewing again, same recipe as above but with a clear pipe, a new tentatively positioned filter, a more organised start and due care during the mash in stage. Fingers crossed!

Brew day #9: A strangely disorganised day from the get go, and one which failed to live up to expectations.