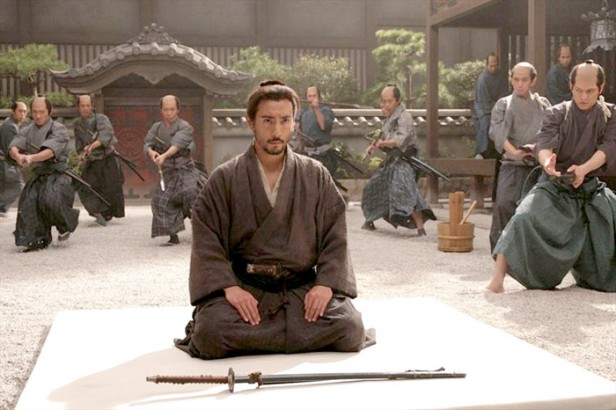 Today I re-read Inazo Nitobe’s Bushido in preparation for writing up my application for independent study during my year in Japan. I hope to study samurai life using this book (amongst others) as a seed(s) from which my research will blossom.

Whilst reading I came across this following quote which describes an eye-witness account from a western representative of a ceremonial suicide by disembowling known as seppuku.

The article originates from A.B. Mitford’s Tales of Old Japan. It makes for fascinating reading, at least it does for a samurai otaku like myself!

We (seven foreign representatives) were invited to follow the Japanese witnesses into the hondo or main hall of the temple, where the ceremony was to be performed. It was an imposing scene. A large hall with a high roof supported by dark pillars of wood. From the ceiling hung a profusion of those huge gilt lamps and ornaments peculiar to Buddhist temples. In front of the high altar, where the floor, covered with beautiful white mats, is raised some three or four inches from the ground, was laid a rug of scarlet felt. Tall candles placed at regular intervals gave out a dim mysterious light, just sufficient to let all the proceedings be seen. The seven Japanese took their places on the left of the raised floor, the seven foreigners on the right. No other person was present.

After the interval of a few minutes of anxious of suspense, Taki Zanzabuto, a stalwart man thirty-two years of age, with a noble air, walked into the hall attired in his dress of ceremony, with the peculiar hempen-cloth wings which are worn on great occassions. He was accompanied by a kaishaku and three officers, who wore the jimbaori or war surcoat with gold tissue facings. The word kaishaku, it should be observed, is one to which our word executioner is no equivalent term. The office is that of a gentleman; in many cases it is performed by a kinsman or friend of the condemned, and the relation between them is rather that of principal and second than that of victim and executioner. In this instance, the kaishaku was a pupil of Taki Zenzaburo, and was selected by friends of the latter from among their own number for his skill in swordsmanship.

With the kaishaku on his left hand, Taki Zenzaburo advanced slowly toward the Japanese witnesses, and then the two bowed before them, then drawing near to the foreigners they saluted us in the same way, perhaps even with more deference; in each case the salutation was ceremoniously returned. Slowly and with great dignity the condemned man mounted on to the raised floor, prostrated himself before the high altar twice, and seated himself on the felt carpet with his back to the high altar, the kaishaku crouching on his left-hand side. One of the three attendant officers then came forward, bearing a stand of the kind used in the temple for offerings, on which, wrapped in paper, lay the wakizashi, the short sword or dirk of the Japanese, nine inches and a half in length, with a point and an edge as sharp as a razor’s. This he handed, prostrating himself, to the condemned man, who received it reverently raising it to his head with both hands, and placed it in front of himself.

After another profound obeisance, Taki Zenzaburo, in a voice which betrayed just so much emotion and hesitation as might be expected from a man who is making a painful confession, but with no sign of either in his face or manner, spoke as follows:-

“I, and I alone, unwarrantably gave the order to fire on the foreigners at Kobe, and again as they tried to escape. For this crime I disembowel myself, and I beg you who are present to do me the honor of witnessing the act.”

Bowing once more, the speaker allowed his upper garments to slip down to his girdle, and remained naked to the waist. Carefully, according to custom, he tucked his sleeves under his knees to prevent himself from falling backward; for a noble Japanese gentleman should die falling forwards. Deliberately, with a steady hand he took the dirk that lay before him; he looked at it wistfully, almost affectionately; for a moment he seemed to collect his thoughts for the last time, and then stabbing himself deeply below the waist in the left-hand side, he drew the dirk slowly to his right side, and turning it in the wound, gave a slight cut upwards. During this sickeningly painful operation he never moved a muscle of his face. When he drew out the dirk, he leaned forward and stretched out his neck; an expression of pain for the first time crossed his face, but he uttered no sound. At that moment the kaishaku, who, still crouching by his side, had been keenly watching his every movement, sprang to his feet, poised his sword for a second in the air; there was a flash, a heavy, ugly thud, a crashing fall; with one blow the head had been severed from the body.

A dead silence followed, broken only by the hideous noise of the blood throbbing out of the inert heap before us, which but a moment before had been a brave and chivalrous man. It was horrible.

The kaishaku made a low bow, wiped his sword with a piece of paper which he had ready for the purpose, and retired from the raised floor; and the stained dirk was solemnly borne away, a blood proof of the execution.

The two representatives of the Mikado then left their places, and crossing over to where the foreign witnesses sat, called to us to witness that the sentence of death upon Taki Zenzaburo had been faithfully carried out. The ceremony being at an end, we left the temple.

The quality of this article that I value the highest is the balanced way in which the activity is explained, rather than quickly assign the ritual as an act of brutal, bloodthirsty heathens Mitford gives a precise and respectable account of what he has seen and has attributed courage and honour to the samurai who has taken his life. For anyone interested in how modern Japan is influenced by their feudal past I’d enthusiatically recommend Nitobe’s book, his patriotic and passionate defence of bushido gives some indication as to why his portrait was printed on 5000 yen banknotes for 20 years (1984-2004).