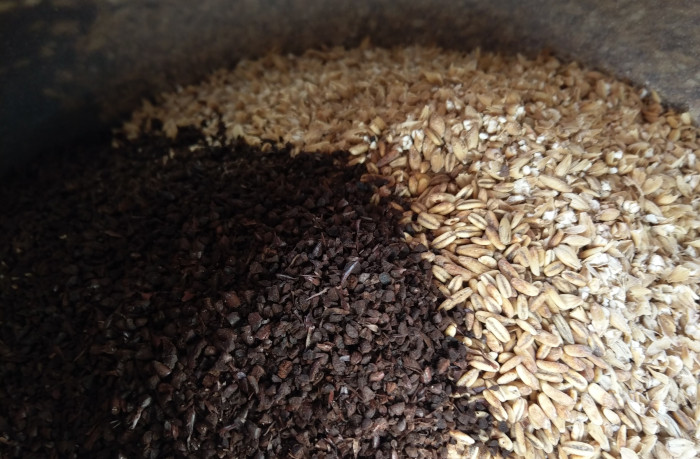 The last brew of the first quarter of 2021, and the final attempt at an 80 shilling base beer, for now at least.

For my previous brew I used some small quantities of left over grains from the brew before that, and adapted some previously brewed 80/- recipes to create my very first original recipe. However, in order to reduce the number of small volumes of differing grains that I would need to use, I attempted to refine the recipe for this brew.

The last beer is still conditioning so I still don’t as of yet know exactly how it will taste but my gut feeling from sampling and smelling the wort at different stages of fermentation is that it won’t quite manage the level of sweetness that I am looking for in order to compensate for the bitterness when I introduce roasted green tea to the recipe later in the year. In order to try and improve on this as well as refining the recipe I also reduced the mash time by 5 minutes in order to try and retain some (but not a lot) of non-fermentable complex sugars.

As well as the Melanoidin malts which I introduced in the brevious brew, I also added some DRC malt - which is a double roasted crystal malt, it apparently contributes a caramel raisin flavour without the associated bitter astringency of some darker malts. I have a reasonably clear idea of how I want my eventual 80/- x roasted green tea beer to taste and I think the DRC malt will help achieve this, I will probably also introduce some orange rind when I come to experiment with tea, presuming I have a base beer to work with.

Last time I accidentally omitted Sorachi Ace from the recipe and used Magnum, this time I rejigged the hop additions and made First Golding the primary hop with some Sorachi Ace addition at flame-out for the “vanilla, tea and coriander notes” that it allegedly imparts, hopefully with such a late addition, I’ll avoid the intense lemon flavour associated with the hop when used for bittering.

Again as per last brew, no dry hopping, this is ostensibly a malty beer.

My usual yeast (White Labs WLP029 - Edinburgh Ale) was out of stock! So I had to choose between a Dusseldorf Alt or Irish Ale style yeast.. The profile of the latter was closest to the Edinburgh Ale yeast so I opted for that.. and hey, many Scots such as myself have Irish heritage so the beer is still authentic ;) .. actually on that, Williams Bros use Nottingham Ale yeast for their 80/- so..

I will create a recipe template for the site and post the recipe details, stages and notes at a later date.

The original (standard) gravity on this beer after transferring to the fermentation vessel was 1.048.. I’d like it to retain some sweetness and as such I’m not really sure of a target final gravity, I’ll just take what I get really.. I expect the ABV will be around 4.5% but we’ll see.

As mentioned above, I still haven’t tasted my first original recipe beer so trying to refine the recipe is a bit bold.. Only about 4 weeks left until I get to taste it and see if my efforts were worthwhile!

The last brew of the first quarter of 2021, and the final attempt at an 80 shilling base beer, for now at least.