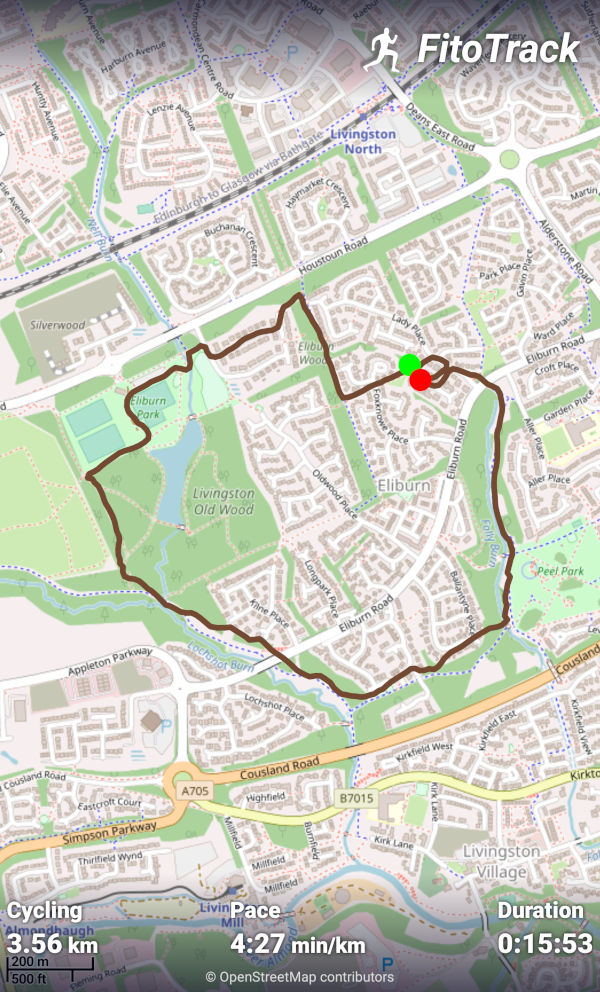 Today, it is basically a storm outside with very strong wind and much rain but as I noted on a social media site (distributed, federated, free and open source obviously), “Bit of a dreich day for my 2nd lunchtime bike ride.. but I am of rain, I was born in Scotland, dreich is my daily driver, a wee bit of rain and wind won’t stop me… Only my resistant legs can do that! 33 minutes more of this psyching up to go." and psych me up it did, I completed a revised circuit and though I considered doing a second circuit (as I intend to progress to soon), I figured that it would be better to stop after one so that I can cycle again tomorrow, rather than push through and encourage the jellification of my legs.

In the same update I also said that I’m “Going to give FitoTrack a go today.", which is a free and open source fitness tracker app with lots of stats, devoid of any data harvesting or adverts, that enables me to track and monitor my progress in much the same way as you might expect of a similar, commercial app tied and bound eternally to a google data centre. The GPS seemed to be reasonably accurate though admittedly not 100%, I seem to recall my garmin watch being of an equivalent level of accuracy and you are able to export your workouts as GPX files or share to whichever apps you have installed on your phone that you may wish to share to, in the form of a png image file. On this point, I have raised a feature support ticket requesting an option to choose the size and file format of the shared file as it is quite large.

If this sounds like something you might like then you can find the FitoTrack app on F-Droid - or other non-ethical purveyors of apps which I’ll not link to here, alternatively you can download the source from their codeberg page .