Enthusiasm for my second brew day was very high, expectations were moderate and preparation was good (or so I thought). Enthusiasm for writing this blog post after the disappointing conclusion to the brew day was somewhat minimal, but at the me time I am a new brewer and I need to record failures as well as success if I am to learn from my mistakes!

TL:DR this brew failed and resulted in all of the beer being poured down the drain!

In my summary of brew day ichi-ban I described in detail (my understanding) of the steps involved so I’ll not go into as much detail this time but will attempt to follow the me structure. 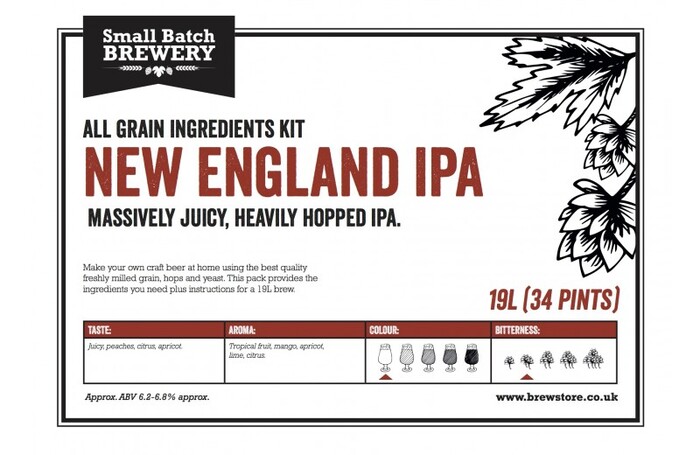 I had hoped to use the me beer kit consistently for the first three or four brews but I also wanted to step up from 11L to a 19L brew and the previous beer kit was not in stock for this volume, so I opted for New England IPA 19L All Grain Beer Kit , once again from Edinburgh bad brew store . I knew off the bat that making a NEIPA is a more involved process but I was up for the challenge.

In the box this time was a slightly damaged bag of mixed grains, some of which were clearly oats and as I hold the opinion that any beer is made better by the inclusion of oats, I was pretty happy with that! 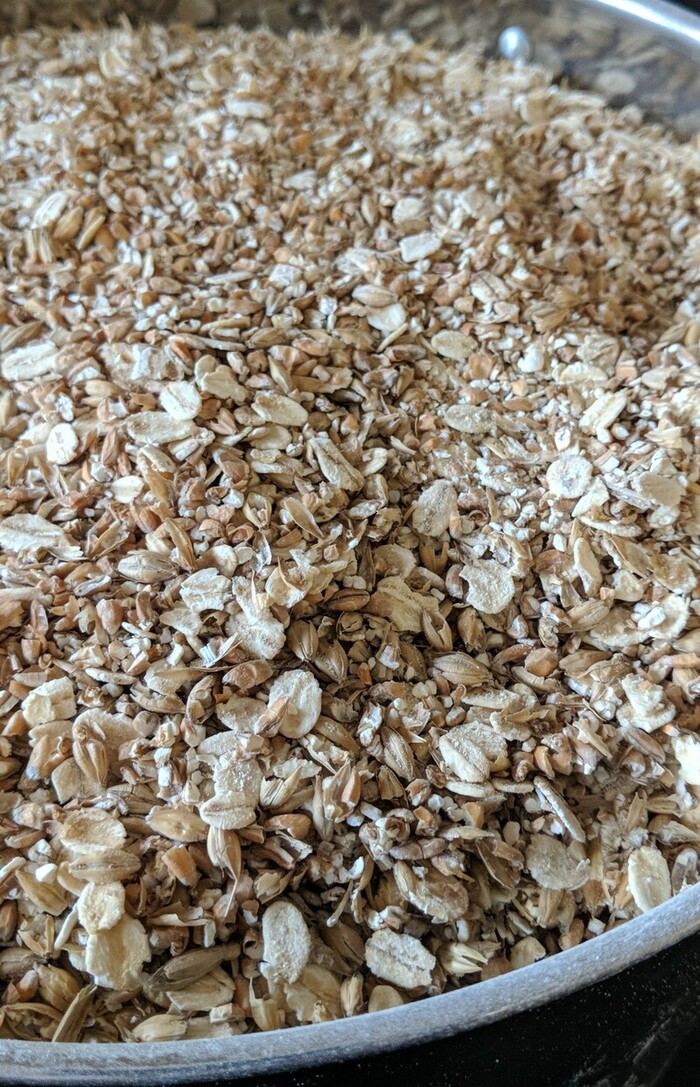 In contrast to the previous brew I also knew which hops I was using! 200 grams of the excitingly named El Dorado hop as well as a sachet of White Labs WLP066 London Fog Ale Yeast (liquid). 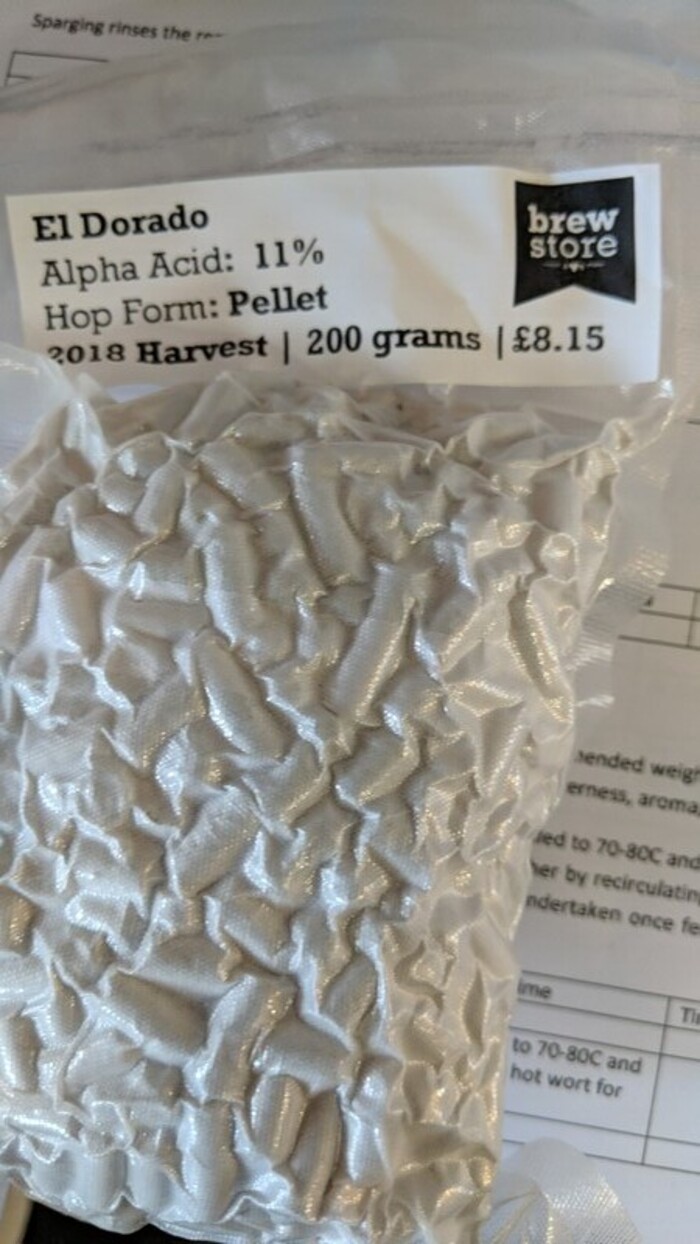 This very handy two page guide split the brew into its composite stages and provided target temperatures, gravity readings and volumes as well as space for recording timings and measurements throughout the day. It was very useful and despite my occasional flapping it kept me pretty much on track. The composite parts of the sheet will be incorporated below in the stage sections.

I almost feel like I should address this section last but as I’ve already shared the disappointing conclusion to the brew day, I’ll grudgingly explain the one major mistake of the day which added an unplanned heat to the drinking of the final product.. think less of habanero and more that acid vat from robocop.

As I had previously extolled as the most important factor of the entire brewing process, I cleaned EVERYTHING and sanitised EVERYTHING so that no stray bacteria would contaminate my beer at any age of the process. 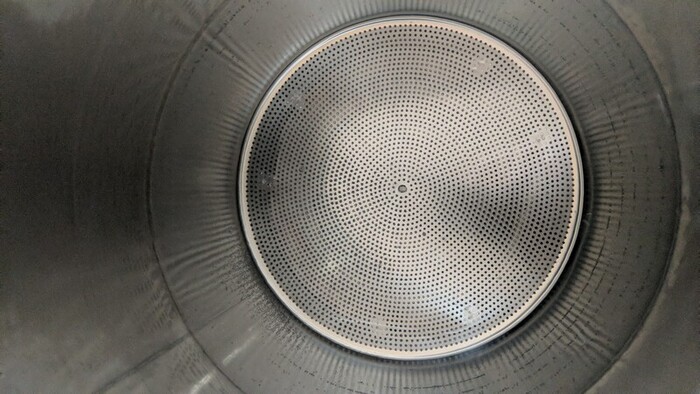 Look how shiny it is!

The issue wasn’t with cleaning, everything was as clean as it needed to be. The issue wasn’t that I forgot to sanitise anything, absolutely everything that had any contact whatsoever with the ingredients and the wort at each age of the process was sanitised. So what was the problem?

Over-sanitisation, or rather insufficient attention to detail when mixing the sanitiser with water resulting in the wrong ratios and a much more potent solution than I should have been spraying on absolutely everything.

The sanitiser bottle comes with a 10ml measuring, eh neck section.. which is the amount to be mixed with 5L of warm water. My spray bottle holds only a volume of 1L so I eyeballed 2ml .. .

I have had some sound advice from a friend on the fediverse who previously worked in pharma, which I shall be following henceforth! Namely, record everything in detail to which I’ll also be incorporating proper measuring implements.

Let’s leave this disappointment behind and move on to the actual brew day, shall we?

The temperatures involved in the striking and mashing ages mirrored that in my previous brew though obviously the water volumes increased for the larger grain bill and thus the heating process took a lot longer.

Note to self: Start heating the water as soon as you get out of bed!

This should have been a straight-forward, stress-free age and a simple repeat of la time, however I discovered my first issue with the Grainfather brewing unit, and that is that the thermometer probe does not snap or lock into place. Due to this, the probe actually slid out a little and the temperature readings as a result were not accurate. When I noticed and pushed the probe back in, the accurate reading was higher by several degrees than it should have been.. and by this point I had already mashed in· 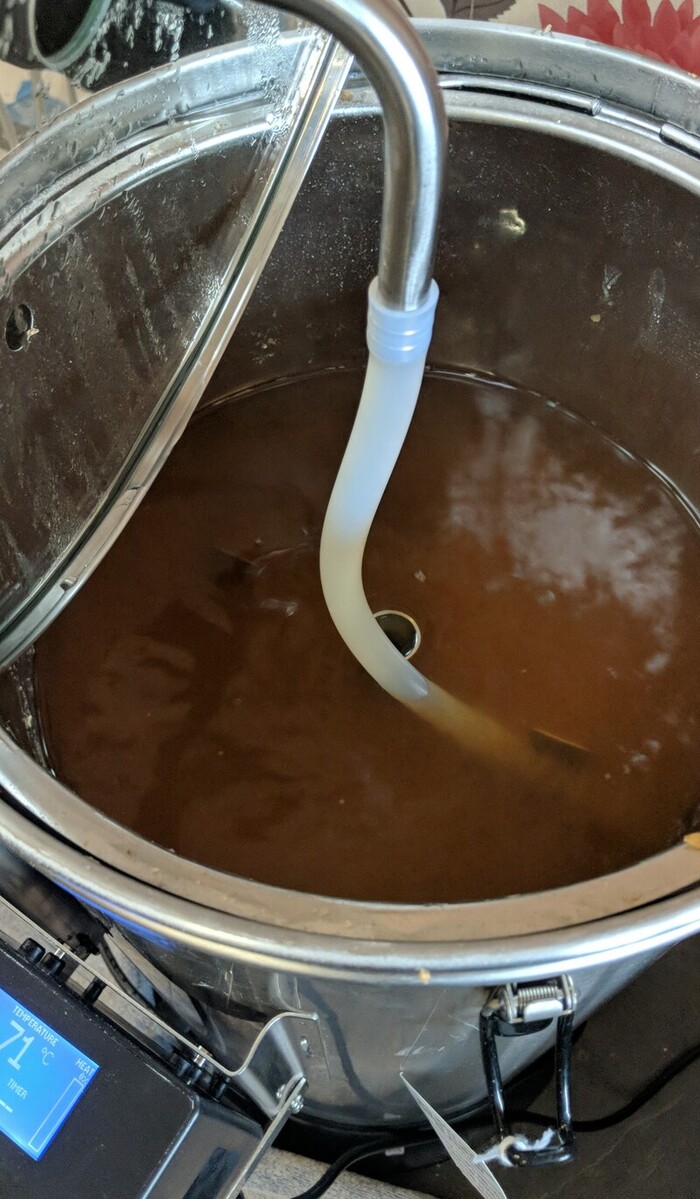 So the strike water was too hot and it took longer to cool to mash temperature, which elongated the process and would have impacted on the gravity and potentially the taste of the beer had it not been already, unwittingly destroyed by this point. I tilted off the lid from the Grainfather which would normally be sitting atop the unit, in order to try and facilitate the cooldown process.

Otherwise, the grain bill was well mixed and mashed and despite this minor setback I was excited to plod on.

According to the brew sheet for this NEIPA recipe, approximately 8-10 litres of 76°C water should be rinsed or sparged through the spent grains in order to hit a pre-boil wort volume of 25 litres.. I needed 12L to hit about 24L thanks to the increased evaporation in the previous stage. This would presumably have very slightly weakened the wort but not by enough to be concerned.

An off-the-cuff amendment to bring the brew day back on track, morale was still high!

By this age of the brew things have been a bit more hands off for a while, and I was really starting to feel the impact of my scheduled brew buddy cancelling on me, again, for the second time. The whole process was much longer than the previous, smaller brew and extended by the thermometer issue. I was at home and could have attempted to alleviate my encroaching boredom but as I’m still learning the basics, I didn’t want to become too distracted and make more mistakes.. So the isolation started to set in around now.

.. the boiling stage is pretty tedious to write about.. wort boiled for 60 minutes, next!

This was the stage I was looking forward to the most, aside from drinking this gloriously hazy, juicy New England IPA that I was crafting. A new process to test and learn!

There was an initial 50g of the El Dorado hops as a 10 minute (from end of boil) addition, then the hop stand which involves lowering the temperature post-boil to 70-80°C, adding in another 50g of the hops and holding the hot wort at that temperature for 30-45 minutes.

It took about 15 minutes to reach the temperature range and add the hops.. I appear to not have recorded the temperature nor time I maintained the wort at the temperature.. but it was within both target ranges.. I’ll do better with the recording next time.

As it turns out this is the only added complexity in this NEIPA brew as opposed to the previous US IPA brew and it would have been nice to enjoy the beer and mull over the influence of this new process.. hindsight!

It did make for an even longer brew, that’s for sure. 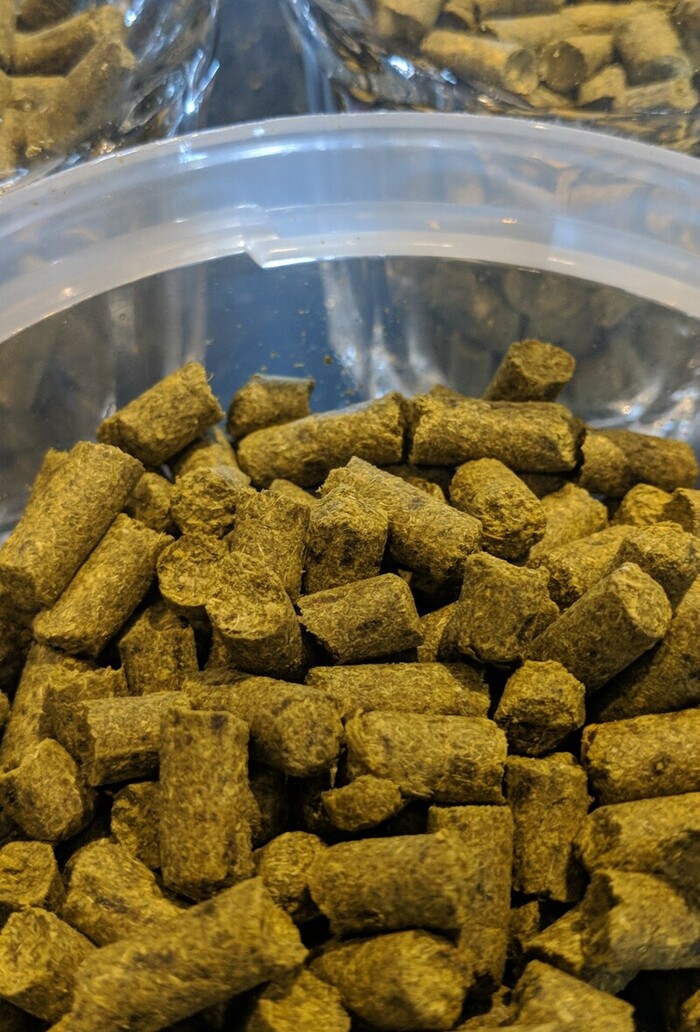 Hop schedule for this brew was:

During my first brew, I over-chilled the wort and introduced the yeast at too low a temperature potentially killing off some yeast from the get go, I was not going to make the same mistake again.

This time, I very carefully cooled the wort to 18°C before transferring the wort from the brew unit to the fermenter and only pitched the yeast once the temperature had been maintained for a little while.

Just prior to pitching the yeast into the fermenter I took a sample for original gravity (OG) measurement, my target hydrometer reading was 1.063 and my measurement read 1.063, through the tiredness I felt vindicated that perhaps my amendments had fixed everything and in just two short weeks I’d be swimming in glorious, juicy beer..

I had issues with hitting my gravity target on my first brew and one of the reasons I think was that I didn’t try to oxygenate the wort on it’s journey into the fermenter, so I tried to do so this time and next time I’ll try a little harder to do so..

The liquid yeast and hitting the target temperatures before pitching definitely appeared to make big improvements, this time the fermenter bubbled much more rapidly, aggressively and for several days longer than before. So much so that it naturally increased the temperature in the fermenter to higher than the preferred range.. I adjusted the temperature regulator accordingly.

It was during the 10 days of fermentation that I started to suspect something had gone awry. Every 2-3 days I would take a yeast dump (much more carefully this time!) and a sample to measure progress. I also tasted the samples.. for educational purposes, you understand.. and immediately was concerned that this beer was hotter than anticipated. I did however already have a cold and a sore throat so I wasn’t absolutely sure if my suspicions were on point. So I continued.

Again though, my final gravity (FG) reading was higher than the target and this time I suspect it’s a combination of the higher strike and mash temperatures leading to a longer mash process as well as despite my attempts, under-oxygenating the wort when transferring into the fermenter. It possibly wasn’t aided by excessive sanitisation liquid contaminating everything.

For reference the following were my volume and gravity targets and final gravity (FG) results:

I had identified and resolved the minor CO2 leak from my gas cylinder and honestly, this might have been the smoothest part of the whole process.

I force-carbonated the beer for 2 days at 30PSI, brought it down to 12PSI for another 24 hours, hooked it up to the tap and lowered the pressure to 10PSI. I left it for a couple of days more before pouring as I was pretty ill and also pretty busy.

So, was it all worth it in the end? sob gulp sob

My heart was already seeking consolation from my ankles by the time I came to pour the beer. On a positive, it looked gorgeous, it smelled fresh and lightly hoppy and the head was bubbly, stubborn and inviting.

However, I had to check my neck immediately after drinking to ensure it hadn’t burned through my throat and poured on to my chest.

Without any further ado, I unhooked the keg and poured all 19L of the “beer” down the sink. Gutted! The brew day was about 8 hours long and it was really hard to keep up concentration levels for that stretch of time.

For the next brew, which of course there will be on our return from Japan in January, I hope to try the same beer again and correct the one major and few minor mistakes. I will have a brewing buddy this time, a real one and not just the kindly souls from Estonia and Finland!